This is the second page to our humble COSMAC Propeller ELF II web presence. It seems on the previous post, the memory was being maxed out and acting a bit strange, so we want to continue to solidly anchor and host more fantastic info about the new "Elves" on this new page, including our own development of the Propeller COSMAC Elves. Let's begin with a small update response to Doug who is in the group of the most avid 1802 ELF enthusiasts!

PROPELLER COSMAC ELF
Doug writes
This is a fun site to peruse and a great summary of all of the elf items around the web. Really quite a piece of work. I do, however, have trouble gleaning what the latest situation is with the Propeller project as, to my eye, the info is scattered around the blog.

Doug, thanks sincerely for your generous and kind comments. You are correct about the Propeller COSMAC Elf II project needing a good distillation of step by step procedures, as currently it's a bit scattered all around, and perhaps an upcoming focus page of its own will be useful when the project is considered ultimately completed and available for consumption...

As currently, it's happily ongoing and the information at the site is indeed distributed across the postings in blog formats. I have very limited time due to an inordinate travel schedule so every moment of free time back at the home base is spent on these projects - the ELF is going well, if not slow to take shape. For the time being, the posts will not be in any consecutive order. Sorry about that. The hardware guts seem to be working and there's software too, but embarrassingly I'm a bit stuck on creating the font panel print, trying to decide the exact layout and get it to fit on the cabinet and coincident with the switches and controls, with the dimensions afforded by the new printer (which all changed compared to the old printer).

Once this hurdle is surpassed, it should be smooth going to get the graphics up on the new screen. I also plan to shop for a dedicated little TV, much like the one I used on the original Elf II. No need to use a video modulator however as the Propeller chip outputs standard NTSC and other formats. You only need a resistor or two to activate it.

As it stands, there are two version of this modern ELF. One is based on a raw single Propeller chip built with a circuit on a solderless breadboard. The impetus of this ELF machine is software to make it do things with the binary toggle switches and LEDs hung on the I/O ports. The programming at the high end is in SPIN and PASM. I use this to emulate and simulate samples of 1802 code with the toggles. The second ELF version is a bit more supreme, still with one Propeller chip but with memory cards, EEPROM chips, and more fancy stuff. It's a go for video card emulation and other niceties including a keyboard, TV, game paddles, VGA, color, sound in and out, Tiny BASIC, etc.

This version has lots of games on it. It can be stand alone, i.e. booting automatically into Tiny BASIC. Both Propeller Elves have a lack of the old Kansas City tape standard and cassette drives for program load and save. That's something I don't miss one bit. The modern more reliable EEPROMS hold up to 128K each of nonvolatile programs and the tiny cute plug card is a 1MB device.

Stay tuned please. As soon as I get more developed, and photos, the stuff will be posted at this web site: http://humanoidolabs.blogspot.tw/2012/03/propeller-elf-ii.html (now updated to this page two) I also want to thank everyone who contributed to the site, and please, if you have any new information, post a link, email me details or just alert me to what's happening new. The Yahoo COSMAC ELF group is really fantastic with a great bunch of guys and actually if I had more time I would live here. :)  A big thanks to the cosmacelf group http://groups.yahoo.com/group/cosmacelf/
============================================= 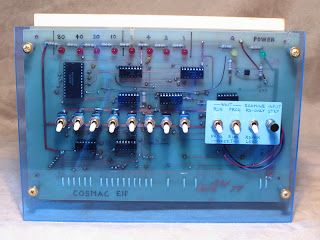 "This is an implementation of the COSMAC Elf, constructed in 1977 going by the labeling and component date codes. It presents an example of early hobbyist computer construction. Printed in the foil pattern is "G. VENTURI Tech 77" and in handwriting "AW Kits 77". As the unit originated in the Vancouver, B.C., Canada area, it was likely a project at KitsilanoHigh School." Check Brent's web site for more photos, links, info and downloads for the following: 1802 Instructions, Some simple programs, Schematic (on a single page), Log, Photos of original form
============================================= 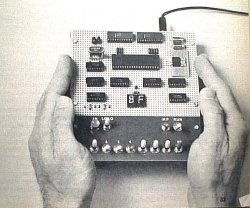 NO ROMS The COSMAC Elf design takes advantage of a special feature of the RCA 1802 microprocessor to operate without ROMs or any other nonvolatile memory.

LOAD MODE NO MONITOR The 1802's 'Load Mode' allows the user to enter programs directly into system memory without the use of a monitor or any other program.

Q INPUT The Q output of the 1802 is a single bit output capable of directly driving many output devices, similar to the later 8085's SOD output. In practice, this line was used for many general purposes, including a software-driven serial output, providing audio output, output to cassette tape for data storage, and pulse-width modulation. 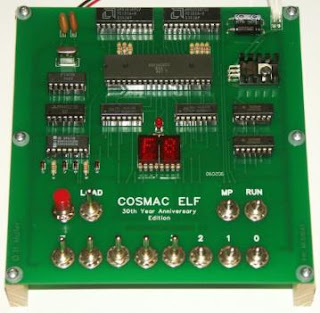 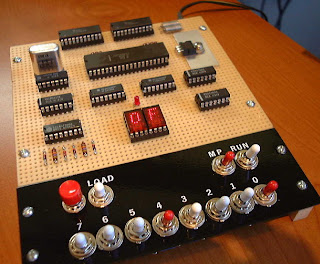 J Kearney built this Elf
http://www.jkearney.com/elf/
It's pretty close to the original (Part 1) ELF.  I do have an 1861 video chip as was used in the revised (Part 4) design, but I wanted to build the original version. Originally I had used a laser-printed front panel, but members of the cosmacelf mailing list pointed me at a source of dry-transfer letters,  so I redid it the authentic way (Detail of switches and panel lettering).  Another nice thing that happened after I first built it was that I located some authentic RCA CMOS logic ICs for a number of the types used in the ELF.
=============================================
1802 MEMBERSHIP CARD UPDATE
Rev D, E 1802 "Membership Card"
"For those just tuning in, the Membership Card is a reproduction of the original Popular Electronics Elf computer, but shrunk to fit in an Altoids tin! It works the same, and runs the same software." - Lee Hart
BREAKING NEWS!
Herb writes, "Saw your post about your "COSMAC ELF Blog" on cosmacelf Yahoo.
http://humanoidolabs.blogspot.com/2012/03/propeller-elf-ii.html
Thanks for describing the 1802 Membership Card. I suggest you update your link to the  "kit support page is at this link". It now points at Revision C; the current revision is E at this link:
http://www.retrotechnology.com/memship/mem_revD.html
Rev E is a minor change to Rev D. In any event the "home page" link you have is unchanged, and it points to the current revision. I have not updated the "product page" you point to for the current revision; but it also points to the "home page" for more information. Herb Johnson
retrotechnology.com host Web site for the 1802 M/S card.
http://www.retrotechnology.com/ for vintage computing restoration, preservation, repair of 1970's computing of S-100, Mac, minicomputers also preserving old tech in iron, glass, rock alternate domain: retrotechnology.net
=============================================
PROPELLER COSMAC ELF
FLAGGING THE PROPELLER COSMAC ELF
One thing we want to start doing is flagging information pertaining specifically to the Propeller COSMAC Elf II project. This will make things easier to sort out when constructing the project and following along. For now, we'll use the following flag: PROPELLER COSMAC ELF
=============================================
PROPELLER COSMAC ELF
Propeller COSMAC Elf II Control Panel Project Let's examine the front panels from the original Popular Electronics article run in the August 1976 issue. As seen, the ELF has eight toggle switches for setting eight bits of data for program input, one input switch, and three system control switches that include Memory Protect, Run, and Load. That's 12 switches. The first Prop Elf will use binary switches for data and will not use the HEX keyboard. The 1802's 'Load Mode' allows the user to enter programs directly into system memory without the use of a monitor or any other program.

Note, the original Elf had no power switch, as the power supply was external to the computer's main board. The current Propeller Elf II has an internal battery option or, as with the original Elf, can use an external power supply with power fed into the front panel's two banana jacks. As completed, this config has a front control panel with eleven switches. Ten of these are toggle switches and one is a push button.

DUAL FUNCTION TOGGLE SWITCHES
With the Prop Elf, some toggle switches are programmed for dual function. For example, the list is as follows:

NOTE: THE LED AT THE FAR RIGHT HAS DUAL PURPOSE AND CAN SERVE AS EITHER A DATA LED OR A Q OUTPUT. ANY LED CAN SERVE AS A Q LINE WITH UP TO EIGHT SIMULTANEOUS Q LINES OPERATING IN PARALLEL DEPENDING ON SOFTWARE.

The Binary display is connected on the Prop's pins using red LEDs in a one to one pin wiring - the pins are set to output in the programming and switched on and off in binary formats.

As seen in the photo, one of the eight data LEDs is used for Q Output. In this view, the Q is the top LED (B7) or the LED on the far right side of the Elf when setting bottom down on a desk. The Elf is frequently used in a vertical configuration, which looks like a really tiny cute tower. "The original Q output of the 1802 is a single bit output capable of directly driving many output devices, similar to the later 8085's SOD output. In practice, this line was used for many general purposes, including a software-driven serial output, providing audio output, output to cassette tape for data storage, and pulse-width modulation." The Propeller chip is capable of all these functions and more. Of course data storage will not involve this LED's pin for cassette tape but rather EEPROM in the first Elf, and EEPROMs and SD Card in the second Elf.
=============================================
COSMAC ELF - What does the cosmac represent? Anyone know the meaning of this abbreviation? We did a little research and found that it represents Complementary-Symmetry Monolithic-Array Computer architecture.

We took our retro PROPELLER POWERED COSMAC ELF II and annexed it to the future. Back to the future, the 1802 simulator is helping to supplement Binary jobs at the Ultra Space Administration's Flight Control Center, with it binary front panel including dual position toggle switches, push button and eight binary LEDs.